At Susie’s Place Child Advocacy Center, we play a critical role in the investigation of child abuse and neglect. 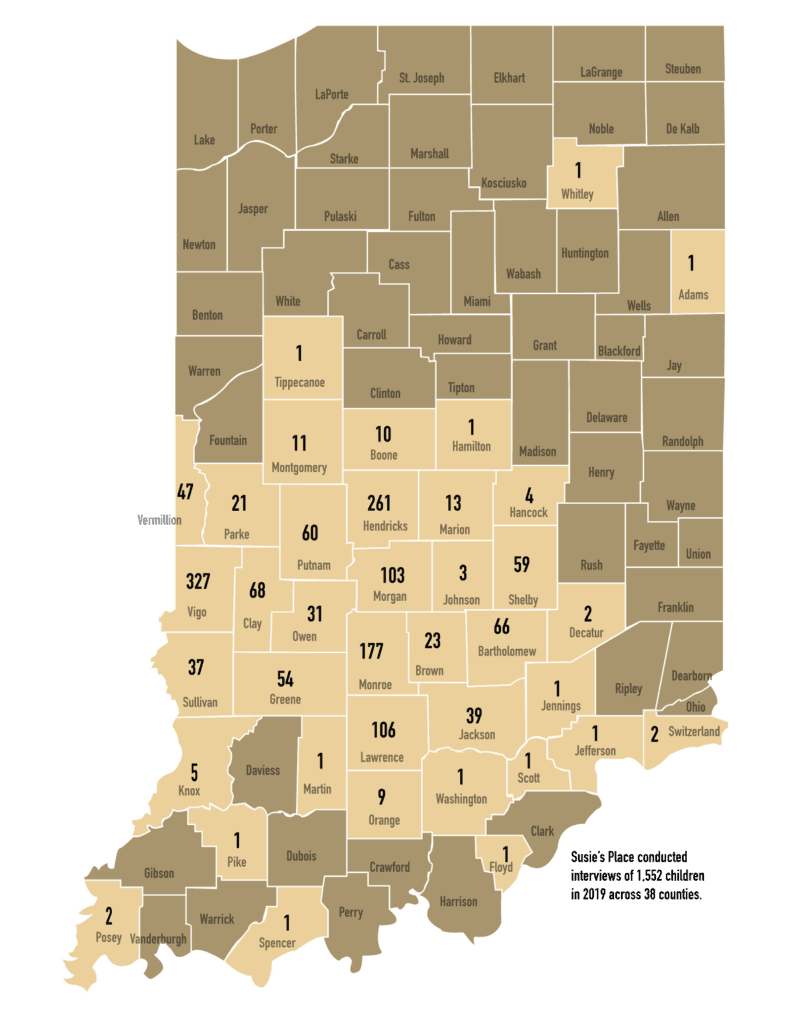 We provide forensic interviews for children in a child-friendly center for the investigation of alleged crimes against children.

In the past, several different people often interviewed children, i.e. school staff, Department of Child Services (DCS), law enforcement, prosecutor’s office. Children were being traumatized by having to tell their story over and over. Also, they were often interviewed in police stations, which are not child-friendly. As a response to those concerns, the Child Advocacy Center was born.

Our goal is to ensure that the child is the main priority during their time at Susie’s Place. We welcome them with a child-friendly waiting room and ensure that the forensic interviewers establish a positive relationship right from the start. The children are brought into a comfortable room with the interviewer and have a neutral conversation one on one. The other team members participate by watching and listening live in another room on a closed circuit television system. Through earpieces, the team members can communicate with the interviewer. This allows for a truly comprehensive, hopefully one-time interview, where the child is at ease and the team gets all the information needed.

All materials from the interview, including drawings or DVD recordings, are given to the team. We also have a Child and Family Advocate who is able to follow up with families to ensure they have the services they need or help them navigate the justice system.

How did Susie’s Place start?

Susie’s Place Child Advocacy Center has been on the mind and in the hearts of many for more than a decade and is committed to strengthening the community’s ability to nurture and protect children and respond to child abuse in Indiana.

In 2005, Emily E. Perry joined the Indianapolis Institute for Families as a Clinical Associate and Director of Special Programs. At that time, the Indianapolis Institute for Families had provided the Child Abuse Treatment Program to Hendricks County for over 20 years. Shortly after joining the Institute’s team, Emily identified an opportunity within Hendricks County that had the potential to systematically improve the county’s ability to investigate allegations of child abuse while maintaining the child as the first priority. Hendricks County needed a Child Advocacy Center.

Through the support and dedication of a number of individuals that participated on the steering committee, Susie’s Place celebrated its grand opening in April 2009. An additional Susie’s Place center was opened in Bloomington in 2011, and the Terre Haute center opened in 2017.

“There is always one moment in childhood when the door opens and lets the future in.”

Susie paved the way for women in law enforcement and investigating crimes against children in Hendricks County.

Sadly, Susie was stricken with cancer in May 2002. After 32 years of service, Susie was forced to retire from the Hendricks County Sheriff’s Department in December 2002. In February of 2003, the Hendricks County community experienced a great loss in the passing of Susie Austin. Susie is survived by her daughter, Marisa (Vanek).

According to Susie’s family, Susie would be proud of the ongoing efforts to protect the children of Hendricks County from child abuse and honored that she was thought of during the development of the Hendricks County Child Advocacy Center. It is because of Susie Austin that Susie’s Place finally came to fruition.

Susie’s Place has conducted over 10,000 interviews and served 10,000 children since opening in April 2009. #DecadeOfDifference

To provide a neutral, child-friendly center to investigate alleged child abuse and neglect in Indiana, while keeping the comfort and safety of the child the first priority.

You can helpShop for Susie’s Place

To strengthen our community's ability to nurture and protect children.